Please also check out the “Public Banking” tab  for alternatives to our current system.

“Only the small secrets need to be protected. The big ones are kept secret by public incredulity.”

JONATHAN SUGARMAN: “So when you think of the fact that when Nick Leeson brought down Barings Bank, it collapsed over eight hundred million pounds, I was signing over five billion every day that we didn’t have”.

3:30 minutes – Structure diagram
“Your monthly payments are called receivables. Your so called lender (the bank) does nothing else but sell these receivables. They are in fact never a lender their real and only purpose is to steal your promise to pay in form of a signed mortgage document also known as a “promissory note” so that they can flip it for cold hard cash; all they ever are is the originator at the outset scouting and securing new loans with deceptive advertising, in fact never lending anything.”
“It is actually you who is the lender, giving the only thing of real value in the transaction and that is your signed promise.”

4:40 The purported “Lender” (Your Bank) then steps aside to function as the Manager and continue to appear as if they were the only party you are dealing with.

The Banks Mortgage Securities Trusts function is to create the offers to then convert the stolen Promissory note to cash by issuing; hence called the Issuer Notes, a Security Instrument much like shares on ASX. (Australian Securities Exchange)

At this point youroriginal loan ceases to be a loan as it is physically impossible to be both a loan and a stock at the same time.”

“A mortgage cannot be both a mortgage and a listed security at the same time.”

5:20 The Trust gets established by the very party that pretends to loan to you. The moment your promissory note is sold and converted on the market in this huge pool with many others the Trust is paid in full and your loan amount has just been miraculously created from thin air. (i.e. bought by pension fund)

6:20 “A mortgage cannot be both a mortgage and a listed security at the same time.”

8:30 The Trust was setup by the manager for the very purpose to flip the loans until it would cash and nothing else.

This constructed internal sale is in fact nothing than major tax evasion; as the seller is paid in full for your note totally Tax free and every time they click further principle payments from you.

Reggie Middleton Uncovers the Future of the Irish & Their Banking System

Reggie Middleton uncovers extremely unnerving omissions, misrepresentations and what appears to many lay persons as outright fraud in the Irish banking system along with an in depth interview with Max Keiser in London. He names several banks directly, some which have already failed, been bailed out and collapsed their investor’s capital, others who are still operating, taking deposits and making loans. Directly after Mr. Middleton’s Irish bank expose series started, the head of the Bank of Ireland (Ireland’s main bank regulator and what used to be their reserve bank until the ECB took over) unexpectedly resigned and actually decided to forgo his 100,000 euro bonus. Hmmmm!!!!
Mr. Middleton discusses the distinct possibility of the Irish people getting “Cyprus’d” and offers tools that they can use to mitigate the risk and ascertain how bad off their country really is. A tour de force in blogging and investigative, analytical journalism through this “new media”. A challenge for the mainstream media to meet, any day!

The Secret of Oz –

The Truth Behind The Modern Financial System,

10 year old explains the truth about where money comes from…

To date the Irish people have paid €69.7bn to bail out Banks. This includes €20.7bn taken out of our national pension reserve fund. €40bn has gone to bail out Private European Banks & The Euro. This is €15,000 for every man wonan and child in the country.

There is also €28.1bn of Promissory Note Bonds about to be sold by the Central Bank of Ireland onto the International money market. This is a further €28.1bn of debt for the Irish people.

How Money is Made / Created: Ben Dyson Explains the Debt Crisis

How much money do they create?

What do they do with the money they create?

He shares some very interesting and profoundly important facts and shows how far the reality of banking is away from the text-book model of banking and which major implications the current system has on our lives.

How do banks create money out of nothing?

How do they create money as debt?

Has money been privatised?

We recommend it as an educational tool and encourage the widest distribution and use by all groups concerned with the present unsustainable monetary system.

Presented at the Positive Money Conference in London.

Regulated by The Central Bank of Ireland:

Author, researcher and scientist, Michael Tellinger has just filed his 1,100 page notice of motion against Standard Bank (South Africa) in the Constitutional Court, accusing the bank of “unlawful and unconstitutional activity”. He also served the notice on the Reserve Bank and the Minister of Finance.

There are two ways to conquer and enslave a nation. One is by the sword. The other is by debt.”

“If the American people ever allow the banks to control issuance of their currency, first by inflation and then by deflation, the banks and corporations that grow up around them will deprive the people of all property until their children will wake up homeless on the continent their fathers occupied”.
— Thomas Jefferson

“I believe that banking institutions are more dangerous to our liberties than standing armies…The issuing power should be taken from the banks and restored to the Government, to whom it properly belongs.”
– Thomas Jefferson

“All the perplexities, confusion and distress in America arise, not from defects in their Constitution or Confederation, not from want of honor or virtue, so much as from the downright ignorance of the nature of coin, credit and circulation.”
– John Adams

A Simple Explanation of the Banking Fraud:

War by other means – IMF _ World Bank are weapons of war , by John Pilger_031 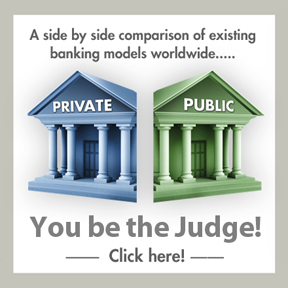