March to the Dáil to Stop the Post Office Closures – 18th Sept 2pm.

A march to Dáil has been arranged for 18th Sept. at 2pm.

The Future of the Network is Far from Secure:

Let’s make it happen in Ireland! 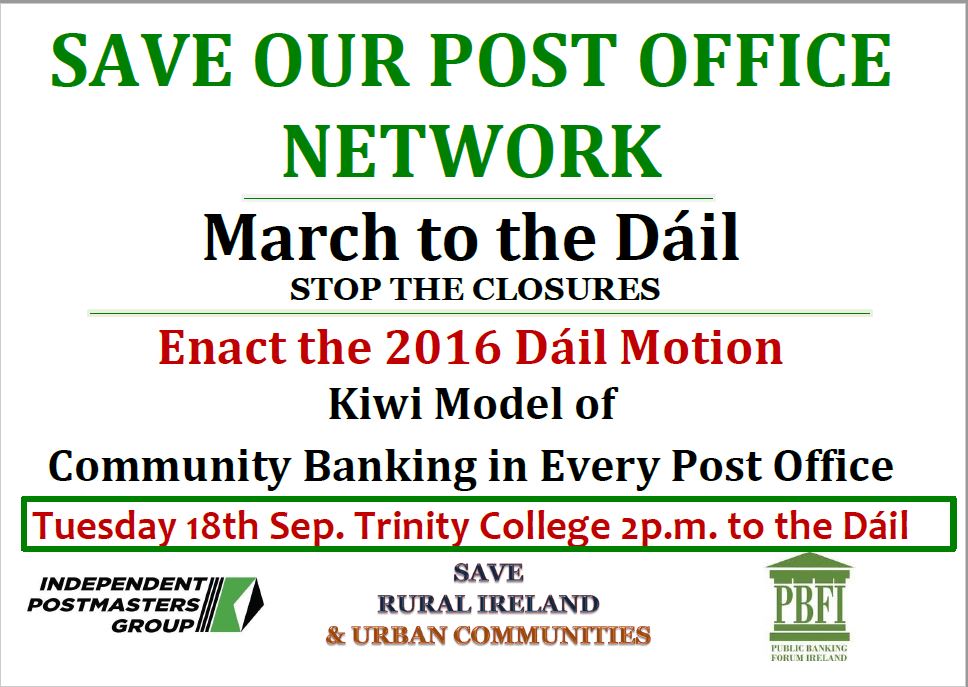 The letter below has been sent to all TDs, Senators and Councillors;

We write to inform you of next Tuesday’s protest march to Dáil Éireann in support of the Post Office network and to further ask for your support (see attached poster for details). Your continued backing and anticipated attendance next Tuesday is surely one of the most important public interest actions to ever come before you. The current proposals to decimate the Post Office network are ill thought out, crude and run entirely contrary to the public interest.

We have highlighted in many forum’s the current level of mis-information being disseminated regarding the Post Office network and the futility of the “solutions” being proffered by the Minister and An Post. PBFI and Independent Postmasters Group made presentations to the Oireachtas Communications Committee on the current Post Office crisis on September 4th last, in which a clear and unequivocal strategy for taking the Post Office network forward was set out, i.e. the remodelling of the network along the lines of New Zealand’s Kiwi Bank (see link below, public session starts at 34mins 20secs).

The planned decimation of the Post Office network will further erode the social fabric of rural Ireland and will set indigenous Ireland back a generation or more. The Post Office has always been the epi-centre of both rural and urban communities. The plan put forward by Minister Naughten and An Post is seriously flawed, however, there is an exciting way forward for the Post Office Network; it can be harnessed in a manner that drives Ireland’s indigenous economy, both urban and rural and re-energises both rural and urban communities.

We look forward to seeing you in Dublin on the 18th. Together we can make history.

2016 Dáil Motion to Stop the Post Office Closures & Secure the Long-term survival of the Network:

We hope to see you in Dublin on the 18th.

Think about it – Community Banking in every Post Office in Ireland.

We can escape the rip-off Commercial Banks!

Published on Mar 21, 2013 Speaking at the 2nd European Conference on Banking and the Economy (ECOBATE) in Winchester, Alex Templeton, Director of the Farm Energy Project, explains how a disfunctional financial system has made it harder to lend to small businesses which in turn impacts communities.
Category: Uncategorized
← 2016 Dáil Motion to save the Post Offices.
Ireland’s three big banks have a virtual stranglehold on small-business lending →